The History of the Nutcracker Ballet 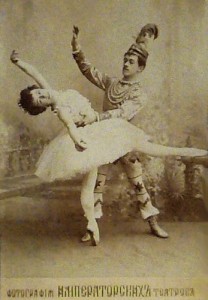 Postcard of ballerina Olga Preobrajenskaya as the Sugarplum Fairy with Nikolai Legat as Prince Coqueluche in the Imperial Ballet's original production of the Nutcracker.

One of our family holiday traditions when I was a child was to attend the Nutcracker Ballet. I first took my daughter to see the Nutcracker when she was three years old. Perhaps it was a bit early, but at the time she was taking a dance class and loved Angelina Ballerina, and sure enough, she was entralled from the moment the curtain opened. So began our annual tradition of attending the Nutcracker each Christmas season.

My daughter is now nine and dance is still her favorite activity. After attending a performance of the Nutcracker last week, she started asking questions about its history, so we decided to do a little research. The Nutcracker Ballet was first performed at the Mariinsky Theatre in St. Petersburg, Russia on December 17, 1782. I am lucky to have attended both an opera and a ballet at the Mariinsky Theatre, so I dug through some old boxes and was able to find a ticket and a picture to share with her. (Historical Note: The Mariinsky Theatre became the property of the state in 1917. In 1920 it began to be called the State Academic Theatre of Opera and Ballet, and in 1935 it was renamed after Sergei Mironovich Kirov. On January 16, 1992, the theatre’s historic name was restored and it became the Mariinsky Theatre once again.) 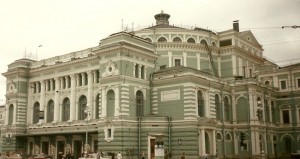 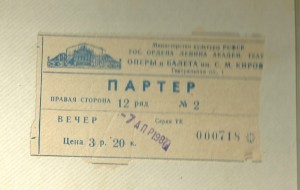 Ticket from the Mariinsky Theatre c. 1987 (known as the Kirov at that time)

The Nutcracker Ballet was based on Alexandre Dumas’s adaptation of E.T.A. Hoffman’s book, The Nutcracker and the Mouse King. The dancing was choreographed by Marius Petipa and Lev Ivanov with the music composed by Peter Ilyich Tchaikovsky. The first production of the Nutcracker received bad reviews from critics and was considered a failure. The ballet was performed in Western Europe in the 1930s and came to America by 1940, but it did not become popular until the 1950s when choreographer George Balanchine made a few changes in his 1954 production for the New York City Ballet, establishing it as a holiday tradition and creating the version we still watch today.

Tchaikovsky died in November of 1893, less than a year after the first performance of the Nutcracker, never knowing how successful and well-known his music would become. The score from the Nutcracker has become one of Tchaikovsky’s most famous compositions and several of the melodies can be heard on television and in film. Can you name a movie or commercial featuring music from the Nutcracker? What are your holiday traditions?

This entry was posted in Uncategorized and tagged Imperial Russia, Nutcracker. Bookmark the permalink.

22 Responses to The History of the Nutcracker Ballet