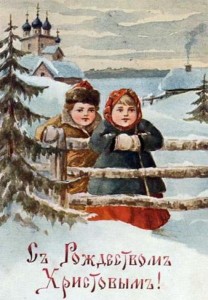 Christmas in Imperial Russia was celebrated with a blend of traditions from Russia’s Christian and pre-Christian past. On Christmas Eve it was customary for groups of people masquerading as manger animals to travel from house to house performing and singing carols known as kolyadki. Some kolyadki were pastoral carols to the baby Jesus, while others were homages to the ancient solar goddess Kolyada, who brought the lengthening days of sunlight through the winter. In return for their songs, the singers were offered food and coins before moving on to the next home. There is a passage in Leo Tolstoy’s War and Peace describing this custom, known as mumming. Everyone participated in the mumming. In the 17th century, the tsar himself, followed by his boyars and courtiers and led by drummers, would travel by sleigh from house to house in Moscow to sing for the owners. Peter the Great was also known to congratulate his friends in this manner, but he kept a list of participants and those who did not join were punished.

Religious observances surrounding Christmas also flourished in Imperial Russia. Though the foods and customs surrounding the observance of Christmas differed from village to village and family to family, certain aspects remained the same. Christmas Eve was the last day of the six week Christmas fast, and for the devout, ancient custom dictated that no one eat until the first star shone in the sky. Hay was spread on the table and covered with a white cloth in memory of the manger. Dinner began with a prayer for the New Year and a special porridge called kutya. The head of the household would throw a spoonful outside to encourage Grandfather Frost to spare the crops, then a spoonful was thrown up on the ceiling. The grains that stuck foretold the number of bees there would be in summer to ensure a plentiful honey harvest. Lastly, upon rising from the table, everyone left some kutya in their bowls for their departed relatives.

After the meal it was time to attend the Christmas Mass. On Christmas day, it was customary for everyone to dress in their finest clothes and go visiting. Tables were spread in a traditional manner with a variety of nuts and fruits, as well as several types of special gingerbread cookies. After the 1917 Revolution, Christmas was banned throughout Russia along with other religious celebrations. It wasn’t until 75 years later, in 1992, that the holiday was once again openly observed.

This entry was posted in Uncategorized and tagged Christmas, Imperial Russia. Bookmark the permalink.