Christmas and all other religious holidays were outlawed in Russia by the Communist regime following the 1917 revolution. Anyone who dared to celebrate Christmas or display any symbol of the holiday was subject to fines or imprisonment. For many years children in the Soviet Union were without a holiday to celebrate – until a curious thing happened in 1935. 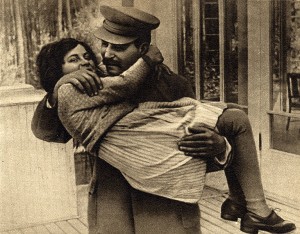 Joseph Stalin with daughter Svetlana in 1935

The British Ambassador to the Soviet Union, Aretas Akers-Douglas, not only held a Christmas celebration at the British embassy in Moscow that year, but he invited Premier Stalin to attend. Stalin, of course, could not attend a Christmas celebration, but for some reason he allowed his children, Vasili and Svetlana, to go. After witnessing how happy his children were after attending the Christmas party, Stalin devised a plan to create a celebration that would make children and their parents happy, thereby creating support for the regime.

In a weekly government radio address a few days after the ambassador’s party, it was announced that Comrade Stalin had declared a celebration to be held to commemorate the progress the country was making on its economic plans. In addition, Stalin wanted to bring this celebration into the home of all Russians, so he mandated that by the first of January, every family would have a live New Year’s tree to celebrate the achievements of the Soviet Union.

In addition to the New Year’s tree, several other traditions were added to the celebration. Ded Moroz, or Grandfather Frost brings children gifts on New Year’s Day, and the Winter Festival, a tradition instituted by the Soviet Government, is still celebrated in Moscow today.

After the fall of the Soviet Union in 1991, many Russians began to celebrate Christmas again (the Russian Orthodox Church still follows the Julian calendar, so Christmas is celebrated on January 7th in Russia), but it is strictly a religious celebration since presents, trees, and other secular elements of the holiday remain part of the New Year’s celebration.

Check out these articles to learn more about how Russians are celebrating this year:

From the Associated Press: Israel Warms Up to New Year’s, Soviet-Style

From NPR: For Russians, New Year’s Eve Remains the Superholiday

This entry was posted in Uncategorized and tagged Christmas, New Year, Russia, Stalin. Bookmark the permalink.